As Always, Julia: The Letters of Julia Child and Avis DeVoto

As Always, Julia: The Letters of Julia Child and Avis DeVoto
Editor: Joan Reardon
Publisher: Houghton Mifflin Harcourt (2010)
The art of writing is a dwindling one these days. Memos, newspapers, family updates and even wedding invitations have become electronic – fragments of data firing at light speed across the globe to any number of recipients... all of whom can reply just as fast. Pen pals in the traditional sense are a rare breed now, almost like mankind has forgotten how to put pen to paper unless it’s to endorse or write a cheque. I’m proud to say that I do, for the most part, handwrite my notes in class, jot rough drafts of papers on good old Hilroy lined sheets, and physically mail my Christmas cards. I also have a conventional pen pal out in England, and let me tell you, nothing beats the excitement of opening the mailbox to find a triple-stamped air mail envelope from her. I can only imagine the elation Julia Child must have felt during her correspondence with Avis DeVoto as an American ex-pat. Readers can get an inkling, however, by paging through the anthology As Always, Julia: The Letters of Julia Child and Avis DeVoto compiled by biographer and editor Joan Reardon. 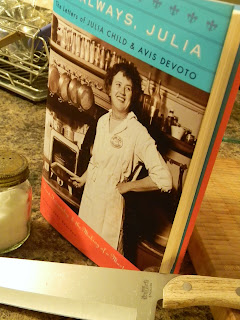 The beginnings of this story of the two women’s correspondence will be known to anyone who has read My Life in France or seen the film Julie & Julia – an accidental fall of fortune to be sure. But what readers of As Always will gain that is impossible to glean from the words of other authors is the unbridled emotion and connection exhibited by the personal words of the women. The book spans the creation of Mastering the Art of French Cooking, right from Child’s initial writing in France (where she opines on her “moral obligation” to the small publisher Ives Washburn and the possibility of recipe stealing, p. 18). Fascinating, too, as an aspiring cookbook author myself, was DeVoto’s original take on the book’s wording and general style as both a literary agent and, most importantly, an American home cook (p. 24). This little diatribe included notes from both Avis herself and the author Dorothy Canfield Fisher (via DeVoto) and provides a type of “inside peek” at the world of publishing. Imbedded in the letters, too, are bits of fascinating trivia about the art of cooking as a whole – that aluminum in the cooking liquid can cause eggs to turn green just as much as too much iron can, that frozen elk can be thawed and re-frozen without incident, and even a list of the “basic” fish to be included in a true Bouillabaisse (p. 99). Avis DeVoto even supplies Child with a recipe herself, for a five-hour-long pasta sauce concoction originally from John Ciardi (p. 61). The only shock came from the early history of their letters, where Julia defends the use of canned soup in cooking – a very un-French (and un-Julia!) notation.
When not cooking, it was obvious that the woman known to most as the Queen of the Kitchen still adored food, from shopping for it to dining out in the many countries the Childs moved to. After Paul Child was finished in France (known for lavish and well-executed meals) they were relocated to Germany, Norway and finally “home” to the United States, where Julia explored both the native cuisine and some of the more “outlandish” fare such as fledgling Chinese fare in Berlin.
It is clear that the letters in As Always were written by not only food lovers, but food writers. The subtle, yet distinct flair the two use in their language and understanding of each other rings of the exacting standards of classic English teachers... and not just due to the era of their penning. The style of their writing, however, does make for a book that is rather “chewy”. While filled with good information and certainly not lacking in emotion, the book is also packed with anachronistic political talk and sayings which often warrant a footnote for explanation. It is more confusing for those readers who did not grow up in the 1950’s and never “caught up” on the general gossip of the time, especially if they do not hail from the U.S. Admittedly, that confusion coupled with the sheer length of each letter (admitted in passing by both of them to be excessive!) does lead to dryness in As Always, and most readers will find their attention straying out of boredom. Granted, the letters were picked out of what must have been an extensive array for their content, but the “food-minded” audience this book would appeal to will find the political satire lost on them.
It is a shame that Avis DeVoto’s story and true gifts to the concoction of Mastering the Art of French Cooking are not widely known. Had she been in France at the beginning of the Trois Gourmandes, the trio would have undoubtedly been a foursome. DeVoto was an excellent cook and writer in her own right, and easily could have written an “American cook’s” cookbook even before her introduction to the world of Julia Child’s cuisine. However, Julia Child is Julia Child, and her infectious personality and energy even in the depths of misery (following the Houghton Mifflin rejection) is one of the driving forces of the compilation. In As Always, Julia, the combination of the two women create a recipe for letter writing as wonderfully emulsified as a perfect Caesar dressing – it’s just tart enough, full of zip and goes down easy.
Available on Amazon
Written by Sarah R at 7:28 PM
Labels: 2010, As Always Julia: The Letters of Julia Child and Avis DeVoto, compilation, Houghton Mifflin Harcourt, Joan Reardon, Julia Child

Yeah, unfortunately the art of writing is a dwindling one these days. But I like to write letters with pen. And I like to write essays. Oh, I know one perfect writing service. If you want, you may try how it works 99 papers

The art of writing is a dwindling one these days. Memos, newspapers, family updates and even wedding invitations have become electronic – fragments of data firing at light speed across the globe to any number of recipients..
TThat's an amazing book!
https://bestwritinghelp.org/articles/write-my-paper-for-cheap/