Delicious Diabetes Cooking for One or Two People Diabetes used to be an “old people” disease. Unless you were one of the unlucky few children born with Type I, destined for a life of chronic carb-watching and insulin shots, the thought of developing the condition never occurred until later in life. Unfortunately, 2.4% of children in the US have Type II (previously “adult onset”) diabetes, and in Canada over a million of the people diagnosed with either type are under 65. Thanks to the prevalence of fast food, convenience eating and sedentary lifestyles, it’s not shocking that the numbers are growing so fast – but thankfully a healthier diet and lifestyle prove time and time again to manage the disease and reduce the risk of internal damage. Food choices, though, were relatively slim when Type II diabetes was relegated to a small portion of the population. Protein- and fat-exclusive diet regimes filled the dietitian’s cookbooks, with buckets of artificial sweetener and often horrible flavours and/or textures. Thankfully, these days the options are not so few and far between, and single cooks are not left out with books like Delicious Diabetes Cooking for One or Two People by Michelle Berriedale-Johnson.

Delicious Diabetes has over 70 recipes practically designed for one or two, both in portion size and ease to make. While the book is marketed as a “diabetic” cookbook, the dishes are suitable for almost anyone and can be doubled or tripled if the need arises. Other diets, especially gluten and dairy, look to be easily accommodated as well, and the whole book strives to prove that diabetic-friendly cooking is easy and accessible by using simple techniques and generally available ingredients. Recipes for every meal are included, from Soups and Starters to Eggs, Seafood, Lamb, Vegetables and Vegetarian Dishes, holiday meals and even chapters on Desserts and Baking. Each recipe contains nutritional information and diabetic exchanges as a helpful guide, although depending on the specific brands and tweaks readers use the mileage will vary. Most ingredients get their own mini-summary as well, with particular notes as to which common items may be a problem for “fragile” diabetics.

Berriedale-Johnson also does a bit of medical discussion in this book as well, giving readers unfamiliar with the basics of diabetes a run-down of symptoms, blood sugar control, alternative sweeteners and the importance of generally good nutrition for disease management. This advice doesn’t come out of thin air, either, since the author has been discussing “special diets” in her cookbooks and on the website Food Matters since the early 1990’s. This experience also explains the nutrition tips and dietary alternatives peppering the book, which in addition to catering for those diets encourages cooks to taste and adapt recipes to make them their own. Looking at the nutrition of some recipes, however, can remind readers of the diabetic recipes from the “old days” – while sugar is kept to a minimum, some of the recipes are very high in saturated fat, with higher sodium and calorie counts than generally recommended in a single serving. This is concerning, especially since diabetics have twice the risk for heart attack or stroke, both of which can be prevented with the use of heart-healthier oils, lower-fat dairy products and less meat-reliant dishes.

Unfortunately, the recipes I tried out were less enticing to eat than the book promised. The Carrot and Red Lentil Soup (p. 15) was in desperate need of salt, and the Hot Plum Dessert (p.131) had an overwhelming flavour from the chickpea flour that I enjoyed but those unused to bean flours found off putting and a poor match for the fruit. Baking from this book was hit and miss – the Strawberry Oat Crumble (p. 128) crisped nicely and adapted well to the use of stevia (in place of the agave called for). I would suggest the optional flour over cornmeal for this recipe for a more traditional look and feel. The Chocolate Brownies (p. 118), though, were by far the biggest disappointment – the gluten free mixture of dry ingredients lacked any form of binder (such as egg or guar gum) to keep it together, leading to the bars essentially self-destructing when I tried to cut them. I can’t say it was a huge shock, albeit an unfortunate one, since I have baked gluten free for years. There was a silver lining to the recipe, thanks to my prior knowledge and experience: By mixing the crumbs from the whole pan of the original recipe with 2 eggs and 1/3 cup of milk and baked it in a 9" pan for 20 minutes I was rewarded with a delicious gluten free item that truly resembled box-mix brownies.

We should all strive to be healthier as a planet, and even if you are not diabetic, chances are you know someone who is. Adapting one or two recipes is not enough for many, especially when they are living alone with the condition, and for that reason books like Delicious Diabetes Cooking for One or Two People are useful on the shelf. In this particular book, the author sets out the lofty goal of catering to almost every dietary need out there, which while commendable is achieved at the expense of thorough recipe testing for practicality and in some cases overall flavour. If you are a skilled “regular” cook, Michelle Berriedale-Johnson’s book is worthy of perusal for the recipes – with a grain of salt. If you are new to the world of diabetic living, though, stick to the nutrition advice and forge your way with a thoroughly tried and true resource. 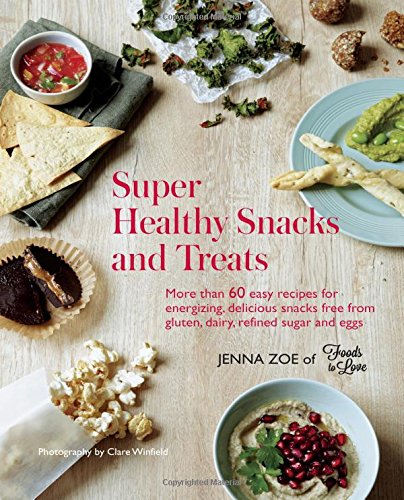 Ah, snacktime. The backbone of most childrens’ (and preschool teachers’) days, filled with lunchbox treats coveted by young and old alike. Who hasn’t hoped for a treat to fill a break in the morning rush or afternoon doldrums, or packed along a little extra “something” for that long ride to the cottage? Unfortunately, the delicacies commonly available to this generation of children and young families (as with every generation before) are far from being fuel to nourish the body and mind after taxing activity. Granola bars, nacho chips and candy-like “fruit snacks” are easy to buy, pack and grab whenever a passing craving strikes – but with that ease and convenience comes empty calories, saturated fats and grotesque amounts of sodium and refined sugar. However, healthier options are relatively simple to create and enjoy with a little time and effort, thanks to authors like Jenna Zoe and her book: Super Healthy Snacks and Treats: More Than 60 Easy Recipes for Energizing, Delicious Snacks Free From Gluten, Dairy, Refined Sugar and Eggs.

Super Healthy has over 60 recipes covering both sweet and savoury noshing. Breakfasts, Party Snacks, Dips and Dippers and even Cookies and Bakes get a healthier twist in Zoe’s hands. The book’s recipes are free of at least one (and often far more) of the following: gluten, dairy, refined sugar and eggs. This is no small feat, especially when things like (double) Chocolate Chip Cookies (p. 118) and Chocolate-Covered Caramels (p. 107) are concerned. Zoe doesn’t swap out ingredients willy-nilly, though – the introduction to the book has a short essay regarding common food intolerances and dietary excesses that are addressed in Super Healthy’s recipe section. While some of the language is a bit extremist and definitely closer to a holistic guru’s mantra than a scientific journal, the majority of her points remain valid concerns today. It is also worth noting that Zoe is the founder of Foods To Love, an online health food shop selling products free from wheat, gluten, sugar, dairy and eggs – so her push towards certain ingredients is not necessarily free of economic gain.

Even without their “health haloes”, the recipes in Super Healthy look so delicious it would be hard to resist a taste! Clare Winfield fills the pages with stunning full-colour photography which causes dishes to leap off the page. A rather “brown” sounding recipe for granola was transformed into the Power Protein Granola (p. 23) I couldn’t wait to make.


The granola, like the other recipes I tried in Super Healthy, was as delicious as the pictures had me believe. The nuttiness of the buckwheat and quinoa was perfectly balanced by the spices and maple syrup, and while I swapped out roasted chickpeas for the nuts the end result was nothing short of delicious. On the sweet side, a box of the aforementioned Chocolate Covered Caramels (made with tahini instead of peanut butter due to allergies) was warmly received by the few friends I gave it to, and the one-bite size I made them expanded the yield to triple what was stated in the book. For a throng of gluten free, vegan or otherwise food-restricted friends, a pan of Sticky Carrot Bites (p. 130) hit the spot – the slightly spicy, rich and dense bars were definitely the “brownies” advertised in the recipe’s preamble. The only change I made was to use slivered almonds instead of walnuts, both due to taste preference and due to the fact that almond milk is the liquid called for. My personal favourite had to be the Creole Cauliflower (p. 77), which fed into my desire for spicy food with a “munchable” texture.


The array of ingredients and (occasionally) food preparation techniques will throw off some cooks looking for an easy, “grocery store” fix. Certain items are on the pricier side, or are rare in non-urban centres, but when you take into account the money and time potentially saved by avoiding illness and purchasing “junk food”, the end result is essentially a wash.

For anyone looking to fill a craving with better-than-normal options, Jenna Zoe’s book Super Healthy Snacks and Treats: More Than 60 Easy Recipes for Energizing, Delicious Snacks Free From Gluten, Dairy, Refined Sugar and Eggs is definitely worth looking at. With nutritious recipes suitable for all ages to enjoy, a healthier future can be more delicious than any box or bag on the shelf.