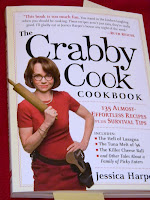 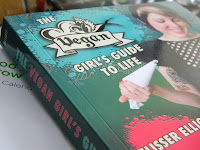 There are a handful of the same problems that plague cooks at home: the same few things get repeated. You know the drill - the same proteins cooked in the same way with the same sides at the same time each day. While omnivores often claim that they have a broader palette to dip their proverbial basting brush in, the growing population of flexitarian, vegetarian and vegan “foodies” is out to change the misconception that meatless always equals monotony. Regardless of whether you are just trying to reduce the meat in your diet, are a “brand new” vegan, or are an old hand at the practice, fresh options are always welcome. Melisser Elliott does one heck of a good job of not just dishing up good eats but also providing a side of tips for daily animal-free living in her new book The Vegan Girl's Guide to Life: Cruelty-Free Crafts, Recipes, Beauty Secrets, and More.
Packed with information on all things vegan, Guide to Life is almost a manifesto. Elliott breaks down a host of possible reasons for choosing to adopt the lifestyle, from the stereotypical “animal rights movement” to the health benefits and environmental bonuses lent by an animal-free existence. Twenty pages of nutrition basics follow, including my favourite heading: “So, Where Do You Get Your Protein?” (answer: it’s a heck of a lot easier than the national Food Guides would have you think). Also mentioned are strategies to cope with food allergies, healthy eating through pregnancy and even an address of the stereotypical, hurtful correlation between veganism and eating disorders. Elliott includes a personal story from one of her close friends who battled the disease and won hand in hand with a vegan diet. Those looking for more personal accounts of living an animal-free life will adore the interviews peppering the book’s pages throughout, including those with fellow female bloggers, friends and business owners.

And the recipes! Those who read food blogs will notice some fairly prominent names in Guide to Life in addition to Elliott’s: from Hannah Kaminsky of Bittersweet to Kittee Berns from Cake Maker to the Stars. The sprouts and polenta preparation from Elliott’s Brussels Sprouts with Crispy Tempeh over Soft Polenta (p. 161) were delicious, while tempeh is a food I can’t enjoy due to my dietary restrictions. A friend of mine looking to include more protein sources in her diet (proof that vegans get perfectly fine amounts!) tried and adored the Thanksgiving Dinner Cutlets (p. 172) over the holiday season. I can’t wait to whip up Cookin’ Crunk author Bianca Phillips’ Sweet Tater Bread (p. 183) either – and I happen to know a few willing taste-testers to try it!

When you’re done making the goodies in Guide to Life, Elliott has some great how-to’s on presentation, packaging and storage too in the chapter “Do it Yourself”. If a green thumb has you going, vegan gardening (who knew there was such a thing?) tips abound as well, and for the textile-minded crafters there are awesome patters for Reusable Produce Bags (p. 199), Cross-Stitching (p. 203) and knitting projects from Kristen Blackmore (p. 213) and Kaminsky (p. 215) too.

Apart from the fact that all the interviews are with women (and the marketing power a female-centric book has), there is no reason why this book needs to be labelled as a guide for girls alone. I know several men who make the transition to a meat-free life and need some inspiration for their daily menus. If they can get past the (dare I say) sexist connotation of every vegan as a woman, the purchase of The Vegan Girl's Guide to Life: Cruelty-Free Crafts, Recipes, Beauty Secrets, and More is well worth anyone’s purchase – and who knows, you might just make at least a part-time veggie out of your meat-eating mama!