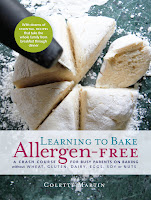 I'm no stranger when it comes to food allergies - I'm not only a nutritionist concentrating in special dietary needs like celiac and allergies, but I'm also someone who has problems eating everyday foods (not the least being dairy, eggs, and nuts). For me, and most of the people I speak with, finding safe food can become a chore that isn't always a tasty one. The most significant challenges are generally when finding or making baked goods without gluten - that don't taste like cardboard. Colette Martin, the author of the website Learning to Eat Allergy Free tackles baking "without" in her cookbook: Learning to Bake Allergen-Free: A Crash Course for Busy Parents on Baking without Wheat, Gluten, Dairy, Eggs, Soy or Nuts.

Unlike many other books dedicated to allergy-safe cooking, Allergen-Free is more concerned with embracing what everyone can eat, not what a single member of a family or group can't. The recipes are all wheat, gluten, dairy, egg, soy and nut free, and most of them are vegan (some items like Cranberry-Orange Scones (p. 118) and Cinnamon-Raisin Whole-Grain Muffins (p.95) contain honey). Substitutions for the allergies covered are inserted as seamlessly as possible in the recipes themselves, and with the exception of the blatantly obvious swaps for dairy, unless you knew what the ingredients were for you may just chalk them up to being another ingredient. For those completely new to the realm of hypoallergenic fare (especially those readers picking up this book in order to cook for a loved one) the first 85 pages are dedicated to Key Lessons - how to successfully replace wheat, milk, eggs and whenever possible avoid soy ingredients. Summaries of each lesson are provided at the end of each chapter in a succinct and easy to understand list that is not unlike those in a highschool textbook.

Perhaps my favourite portions of "Part 1" are Martin's pieces on Redefining Healthy Eating (p. 12), Eating Together (p. 14) and Breaking the Rules (p. 15). These speak to the heart and soul of those with restrictions and those who love them, as they bring to the forefront the true worth of food - not simply a matter of feeding, but an experience that should be relished in every part. Allergen-Free's introduction also includes a portion on The Allergen-Free Baker's Pantry (p. 67), which is like the preamble to any good baking book (containing lists of recommended tools and "stock" items to have on hand) in addition to safe shopping and organization to avoid contamination. For even more insight on the capabilities and varieties of store bought allergy-free baking mixes (such as brownies, muffins and cakes) the last chapter provides a lengthy, but easy to read how-to manual of sorts that also features innovative twists on the standard preparation methods. A convenient staple to have on hand, especially with a busy life and family, these boxed mixes occasionally call for dairy or eggs - however Martin also has answers for those ingredient needs. As not many of these pre-made mixes are commonly available in my area (though in larger Canadian cities and definitely in the United States they are in regular grocery stores), but if I had a special occasion such as a birthday or function with food-allergic individuals I would certainly source a suitable mix to make the Favourite Chocolate Cake (p. 241) or Raspberry Brownie Bites (p. 250).

The recipes in Allergen-Free are all found in the second half of the book - although given the length and depth of the appendicies and notes at the end it may be more appropriate to term it the middle! Martin organizes the offerings into Cakes, Muffins and Quick Breads (p. 89); Scones, Doughnuts and Other Yeast Free Standbys (p. 111); Cookies, Tarts and Pies (p. 127); Breads, Rolls and Pastries Made with Yeast (p. 151); Chocolate 1-2-3 (p. 187); and Bars, Cookies and Stovetop Delights (p. 209). Thanks to a neighbour's over-producing zucchini garden, the Zucchini Bread (p. 103) was a logical first choice for my testing. I mixed my own flour blend from chickpea, brown rice and sorghum flours (Martin simply calls for a "gluten-free flour blend") and substituted a home-made, thick rice milk for the hemp milk. The resulting loaf was incredibly moist and fluffy, with a texture identical to any cake I've had. I'd hesitate to call it a real "quickbread", though, as it is nowhere near as hearty or dense as one (conventional or allergen-free). It's also hard to clearly classify it amongst the ranks of zucchini bread due to the distinct lack of spice in the recipe - it tasted more like a "white" or "vanilla" cake that happened to have zucchini in it. In fact, when I served it to my taste testers, they told me that though they'd never know it was allergen-free if I hadn't said anything, the only indication of the vegetable were the green flecks. While this is a good thing or not is a personal preference, but parents could certainly use peeled zucchini and picky children would gladly eat the "cake" as an afternoon snack.

I also made a few batches of Martin's Baked Doughnuts (p. 119) for the office crew at my mom's work. As written, I found the mixture to be very problematic - the directions called for "rolling a ball of dough back and forth between your hands" to make the "ropes" which would become the doughnut rings, but what I wound up with was so wet and sticky (even after adding extra starch) that it was all I could do to get 5 circles before giving up. Thankfully, I opted to put the remaining batter-dough in mini muffin tins and was rewarded with fluffy, moist doughnut holes that were far better in consistency and flavour than the flat, spread-out attempts. Like the zucchini bread, there is no spicing in this recipe, which struck me as odd since all the old fashioned doughnuts I've made or eaten have contained at least a touch of nutmeg. The second batch of doughnut holes I made (which you can see here on my food blog) used mashed banana and not the applesauce in the original, plus extra binders and spicing. This round was much closer to a "dough" than the previous one, but I still opted for the doughnut hole format and was not disappointed - especially after glazing with a powdered sugar-cinnamon mixture. With my notes on that recipe, it will be one I continue to make over the years.

Many of the recipes in Allergen-Free call for hemp milk, which cooks who are making one or two of the recipes for a friend or loved one will, like me, find hemp milk prohibitively expensive and not that tasty on its own. There are many other allergen-free alternatives on the market including rice and coconut, and obviously, where soy, dairy and/or nut allergies are not a concern those respective drinks can also be used without issue or conversion. The Zucchini Bread also calls for Ener-G Egg Replacer powder, which is a specialty ingredient but one I find indispensible in my kitchen - per serving it is less expensive than eggs (one $7 box replaces up to 100), and as an egg-allergic person I would wind up with half a carton spoiling before I could use it. Luckily, for those loath to purchase a box, Martin often notes in her recipes what ingredient replaces eggs, and how many are being substituted - the reader need only flip to the chapter on Baking Without Eggs (p. 53) to select another.

The final portion of Allergen-Free is mode of a series of appendicies: Troubleshooting Recipes (p. 253), Substitutions (p. 257), A Blueprint for Adapting a Traditional Recipe (p. 259), Metric Conversions and Weights (p. 263) and a list of Resources (p. 267). These nuggets of information are invaluable for the fledgling cook in general, not the least one beginning to bake allergy free. Even as a long-established baker of both "standard" and allergy-free items, I appreciated the wealth of information organized in this portion of the book.

Lovers of classical baking will find no lack of treats to make in Learning to Bake Allergen-Free: A Crash Course for Busy Parents on Baking without Wheat, Gluten, Dairy, Eggs, Soy or Nuts - regardless of whether they're afflicted with a food allergy. Colette Martin is approachable both to novice bakers and old pros, with a writing style that is direct and descriptive without coddling the reader, and though the recipes are mild in flavour they are a blank canvas to experiment with. Any bake sale, dessert table or brunch buffet will benefit from this book, and when everyone can share a meal we can all feel free to enjoy.