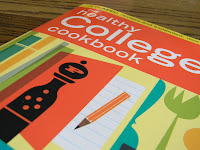 
Stereotypical college life is fairly simple: dorm rooms, cafeterias, all nighters, takeout pizza and lots of liquid “sustenance” in both caffeinated and alcoholic forms. While it is definitely not as party-hearty as the movies and TV shows would have you believe, there is no denying the fact that students are in a very different situation than when Mom and Dad were in charge. Meal plans and the accessibility of not-so-healthy options in campus cafeterias make healthy eating a challenge, and with growing numbers of young adults leaving the nest without learning how to boil water the thought of using the kitchen facilities can be daunting.


Enter the by-students, for-students culinary solution: The Healthy College Cookbook. Written by Alexandra Nimetz, Jason Stanley and Emeline Starr, this new edition adds recipes from a fresh wave of post-secondary students and turns the simple “how to” original into a verifiable catalogue of ideas. Not only are the recipes simple, relatively quick to prepare and inexpensive, this cookbook is also filled with information on setting up your first kitchen, basic cooking techniques, grocery shopping and other “kitchen tips” that are smattered throughout the 283 pages. Handy symbols on each recipe denote vegetarian, vegan, “super quick” and “dorm room favourite” selections and all have a brief nutrition analysis provided for them.


For those who are truly new in the kitchen, the first chapter “Getting Started in Your First Kitchen” is a must read. Even as a seasoned home cook, I appreciated the tips the authors gave (like Three Easy Odour Beaters (p. 6)), and I wish that as a student I had the Cookware Essentials list (p. 3)! The herb and spice section is almost an encyclopedia (in a good way), including suggestions of what to use on what food you’re cooking. A small note on healthier substitutions (p. 17) is basic but useful for most “recipe makeovers”, and I particularly appreciated the line “... remember, 1 slice chocolate cake = 27 minutes on the Stairmaster!” (ironically for a 150 lb individual this is extremely close!). The only part of this introductory chapter I found lacking was the cupboard and fridge “essentials” list (p. 5-6), which has significant gaps in terms of what to keep on hand for most of the recipes to follow.

College Cookbook is categorized into eleven chapters, which is a bit superfluous given the bulk of them fit more than one “mould” (and some cases would do better in a different category). While Chicken and Bacon Quesadillas (p. 61) is documented as serving 8 to 10, I defy any college student to have just half of a tortilla as a snack. The entire contents of the “Pasta” section fit neatly into one of the Vegetarian, Seafood, Chicken, Meat or Sauce chapters, and the solitary turkey recipe (Turkey Burgers (p. 212)) looks awkward nestled in the Meat chapter with the beef and pork offerings. While the “Side Dishes and Sauces” chapter contains baked, twice baked and mashed potato recipes, the “Appetizer” section also contains a baked B.L.T. Tater (p. 58) which is essentially the same thing. A condensed table of contents and better categorization of the recipes would probably better suit the “easy” marketing angle of the book.


The actual recipes in College Cookbook are generally solid, dependable creations that the average student would both be able to and want to recreate. The meals are also those that can “grow” with the cook as they build their kitchen and cooking know-how, allowing enough free reign to experiment with flavours and ingredients while still maintaining the integrity of the original dish. That said, not all the recipes in this book are what I (or some students I consulted) would consider “healthy”. A single serving of the aforementioned Chicken and Bacon Quesadilla (half of one tortilla) clocks in at 230 calories and 13 grams of fat! Given that the majority of the student body would easily have two (if not more) servings at a time if they were feeling peckish, the Freshman 15 wouldn’t  be too far off.


Some recipes are too simple for anything but a child’s cookbook to have, such as Ants on a Log (p. 47) or Cottage Cheese on a Bagel (p. 72) while others are more complex, time consuming, hard to store, expensive or “gourmet” than what the average college cook is willing to approach. The “harder” recipes shouldn’t be discounted completely, however, as they are a wonderful place to turn when time and a fully equipped kitchen are on your side (perhaps over Summer break?). Even the “middle ground” items like Tofu and Broccoli Stir Fry (p. 133) are perfect for any home cook’s repertoire, regardless of their age or living situation. I love that this updated version of College Cookbook does contain a decent amount of tofu-based recipes and vegan options, and while a lot of the recipes are sorely lacking in vegetables as written, adding produce to stir fries, pastas, soups and casseroles is simple. Another strength of this book is it’s high ratio of “takeout”-like recipes. For anyone on a budget, let alone those who are chronically surrounded by fast food, being able to make a cheaper and healthier option is a big plus.

This book is definitely not just for broke, stressed out, time-crunched or lazy students looking for the next snack – although it suits that purpose as well. There is enough variation in the pages to tempt food lovers of any age, especially those who commute to work or have children to care for. I had the pleasure of having a lightning-quick, stick-to-your-ribs (albeit almost cement-thick) bowl of Peanut Butter Oatmeal (p. 26) one morning, while my mom has been enjoying reheating the Chicken Curry (p. 202) and Thai-Inspired Beef and Pasta (p. 150) at work. In both the case of the curry and beef dishes, I followed the student-life example of using what you have around and catered to my mom’s desire for vegetable-heavy dishes with a few substitutions and additions. The creamy curry (originally a milk-based sauce with diced onion and chicken cubes) became in essence a rich vegetable curry packed with mushrooms, cauliflower, snow peas and carrots and an occasional mouthful of chicken. The six ounces of thinly sliced, marinated round steak stretched to three filling, nutritious meals (rather than the two servings as written) with generous additions of carrot, green onion, mushrooms, bell pepper and snow peas. In both cases, the full flavour of the original recipe still shone through, and allowed the small amount of protein to carry through many meals without resorting to adding a huge amount of starch like rice or pasta. As we didn’t have any on hand, the macaroni in the Thai-Inspired Beef became brown rice stick noodles that my sister had brought back after her second year in university, adding a more authentic flair while also costing less per serving than standard Italian pasta. We’ve earmarked several other recipes in this so-called College Cookbook which are perfect for our hungry, busy and frugal family of five’s dinners as well.

For those about to head off to school in September, or their parents, this book is a fabulous investment in the future. The health and wellbeing of young adults and families is at stake thanks to the inability of the younger generation to craft a meal from scratch and the lack of time or patience the older generation has to play teacher. The hidden value in this book is truly in that it makes cooking approachable and fun, two qualities which are frequently forgotten in the world of 500 page gourmet tomes and perfectly executed television shows. Anyone who pages through The Healthy College Cookbook will find something of value, be it a tip about deodorizing the kitchen or an impressive but low-fat burger, and the lessons learned along the way won’t be as fleeting as those from early morning lectures.

Wow you're a good writer :) my reviews are usually "oh hey I made this and I liked it" LOL so happy you got to try the book!