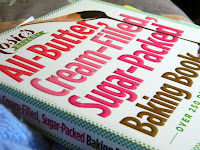 It’s hard to argue with good old fashioned honesty, especially when it comes to food. These days, there is so much out there in the ways of additives, preserving agents and allergens that it’s hard to find something that really is what the label says it is. This is doubly true for the commonly misleading “diet” food out there, which may be low in fat, but with the trade-off of staggeringly high calories and sugar grams, or an item like sugar-free chocolate and candy which can ruin your night if you overindulge (and not to mention still contain gross amounts of calories and fat). Home cooking is no stranger to modifications in the name of heath either – how often have you tasted a sawdust-y, spongy cookie or gummy slice of cake, to be told later that it was “better for you” thanks to sugar substitute, coarse milled flour and applesauce in place of oil?  While there are certainly successful, and dare I say delicious, methods of increasing a recipe’s health potential, it is refreshing to see a cookbook on the shelves that is willing and happy to declare the decadent ingredients the recipes contain. Judy Rosenberg, the owner and driving force behind the highly successful Rosie’s Bakery franchises in New England, took that unabashedly proud stance in her latest collection of decadent treats: The Rosie's Bakery All-Butter, Cream-Filled, Sugar-Packed Baking Book.

Rosie’s makes no attempt to be a beacon of health and wellness. Like the title describes, the recipes contained in the 401 pages of text are laced with sticks of butter, pounds of chocolate, lashings of cream and cups of white and brown sugar. However, while not a weight loss or cholesterol-lowering how-to manual, the sheer fact that this book contains these most simple and pure cornerstones of baking, unadulterated by the chemical additives of modern day store-bought goods, makes it a book that you can feel good cooking from. The food made from the pages of this cookbook is so satisfyingly rich that portion control is second nature. While you may be tempted to take two (or ten!) Soho Globs (p. 136) off the cookie platter, the 12 ounces of chocolate and ¾ stick of butter in the recipe ensure that you’re sated after just one. Rosie’s Blueberry Muffins (p. 107) are sweet enough to have with a late-afternoon coffee or tea, but still hearty enough for a special brunch – you can even try to convince yourself that the oats in the crumble topping qualify as breakfast cereal. Even recipes as over-the-top as the Chocolate Delirium (p. 77), featuring a pound each of butter and bittersweet chocolate, six eggs, six extra egg yolks and a cup of brewed espresso, slip comfortably into the category of “special occasion without guilt” food... and Rosie’s definitely has it’s fair share of “special occasion” fare!

Where this book makes it’s mark on the average reader is in it’s vast collection of what I term “bake sale classics”. These are the items that seem to show up on almost every bazaar, fundraiser or company picnic dessert table, always from the local bakeshoppe or grocery, and for the most part nobody can figure out just how those businesses made them so well. With Rosie’s, the reader is privy to those secrets firsthand, and after adhering to Rosenberg’s recipe once or twice the formulae are easy enough to tweak to your individual standards of perfection. I made both the Tart Lemon Squares (p. 284) and the Rhubarb Bars (p. 285) in this book, and the changes I made from one batch to the next were minimal but imperative in transforming the recipe from Rosie’s to mine. For the lemon squares, which were bright and tart as described but lacking in a true “lemon” flavour as originally written, I added the zest of the juiced citrus, the leftover yolk (the white being used to glaze the crusts of both lemon and rhubarb bars) and a pinch of salt to the custard filling. The result was like the lemon bars from a roadside bakery stall we would visit on summer road trips in my childhood, but better – fresher, lemonier and with that perfect touch of “zing” to break through any taste of egginess in the filling. Fresh backyard rhubarb formed the basis of the other batch of bars, and I bumped up the “rustic” factor of their homemade appeal by making their base out of whole wheat flour and topping the gooey, chunky filling with a shower of large flake oats. Both versions were sweet without being cloying, and the rhubarb was definitely present in taste and texture thanks to it’s use “in the raw” as opposed to other recipes where the vegetable gets cooked to a pulpy mush first. Neither of these recipes yielded anything by way of leftovers when I brought them to an open house, and even the three year old present had one of each and licked his lips.
Rosie’s is not without a few minor glitches and detractions from it’s professional quality content. A sticking point with me, as it is with many of those visual learners out there, is the lack of photos. While I realize that with over 250 recipes a photo for each is simply impractical, a picture of some of the more complicated (or deviously-named) items would be beneficial. Then there is the case of the naming of certain recipes. For instance, the Pecan Fingers (p. 171) are no more pecan cookies than a piece of toast with sliced banana on top is banana bread. Without nuts in the actual batter nor baked with the recipe at all, the only time pecans come into play is in a haphazard scatter garnish over the cooled, glazed finished product. Minimal, to be sure, but confusing if you come across the page in the index looking for a chunky, crunchy nut cookie.
There are too many recipes in The Rosie’s Bakery All-Butter, Cream-Filled, Sugar-Packed Baking Book for either one’s wallet or waistline to contend with in a short amount of time. But perhaps that is the biggest part of it’s allure. Judy Rosenberg has written this tome of simple, honest and delicious treats to last through the years, regardless of what fad diets come and go. Readers can use this book to hone their own skills in the sweet kitchen and teach their children the appreciation of what real, whole food can do. It is a book I feel confident in returning to again and again over time, both for ideas for day-to-day goodies and how-to’s for those “special desserts” that fill our lives. All without a car trip, special order, two week waiting period and marked up price tag.
Available on Amazon
Written by Sarah R at 12:22 PM
Labels: 2011, Baking, Judy Rosenberg, The Rosie's Bakery All-Butter Cream-Filled Sugar-Packed Baking Book, Workman Publishing