Meals in a Jar: Quick and Easy, Just-Add-Water, Homemade Recipes 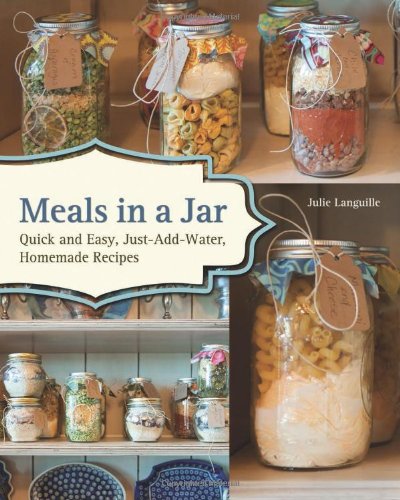 Everybody’s busy. These days, between shuttling from work to ballet practice to soccer to swimming, putting a meal on the table is all too often just left by the wayside. The need to feed the family on those days usually results in a quick pop-in to the local fast food joint, or at best the 20 minutes it takes to make a box of mac and cheese. It’s true that these prepackaged shortcuts are handy solutions in a time crunch or when cooking from scratch isn’t an option (due to lack of time or ingredients), but they are full of preservatives, colourings and other artificial additives too. Julie Languille, creator of the meal planning service Dinners in a Flash©, attempts to bridge the wholesomeness of scratch-cooking with the convenience of the box in her book Meals in a Jar: Quick and Easy, Just-Add-Water, Homemade Recipes.

Meals in a Jar contains 125 recipes for every meal of the day, including desserts, snacks and even beverages. Everything is designed for medium- to long-term storage and minimal preparation time come cook day, although a good portion of the meals take at least 45 minutes to cook due to their use of dried beans and grains. While Languille breaks down the process of creating these packaged meals, it is not apparent until you are in the middle of reading the recipes that “Quick and Easy” is a bit of misnomer. To use this book, most home cooks will have to purchase several pieces of equipment including a pressure canner, a food dehydrator, retort pouches, mylar bags and a vacuum sealer. In addition, readers of this book should plan to clear out a large section of their basement or garage and install shelving to house the ingredients, as well as the finished goods. This is because all the recipes in Meals in a Jar make between six and 8 meals, each serving between six and 8 people. Some recipes like Muesli (p. 33) call for 27 cups of oats, 6 cups of dried fruit and 4 ½ cups of nuts – amounts which are not typically practical (or economical) to purchase and store. The time it takes to create these “simple” meal pouches is also prohibitive for most people, since the main reason for turning to prepared meals in the first place is lack of time!

Because the meals are only really suitable for larger families (6-8 servings), smaller families and singles are mostly out of luck for go-to meal solutions. The idea of leftovers would be nice in normal circumstances (albeit a bit tiresome after the fourth day of Tuna Noodle Casserole (p. 83)), but since this book seems to be intended as a resource of food for “emergency” situations (a la MREs), what would be the chances of adequate refrigeration (or running water and heat for that matter) in those circumstances?

The only items I could see myself ever making from this book as a singleton (who occasionally cooks for her mother) are the dried soups and desserts, which are handily broken down into “one meal” batches by virtue of the assembly instructions (stating “in each bag...”). Of these, I will probably give the exotic Armenian Lentil Soup (p. 64) and Cranberry Walnut Oatmeal Cookies (p. 160) precedence, though I won’t bother with the “seal in bag” portion and simply make the recipes straight through. I’m sure that those recipes relying on normally “dry” goods like pasta, rice and beans will fare much better taste-wise over time, especially with those who are unaccustomed to the taste and texture of freeze-dried produce and meats.

Some recipes in Meals in a Jar, particularly for what Languille calls “side kits”, are simply inane to include. Does valuable space in a meal preparation guide need to be devoted to packaging a Corn Tortilla (p. 130) mix (comprised of corn flour and salt), or Dried Beans (p. 133)?

One of the other major issues I had with Meals in a Jar was that simply locating any of the ingredients or equipment was impossible. Freeze dried food and specialty powdered items (like eggs and cheese) is rarely found in standard stores, and when purchased online is too expensive for most budgets. There is no resource guide for either equipment or ingredients in the book, which is frustrating. Between the equipment, ingredients and power required to create these packets, it’s no wonder that the store shelves are lined with 75-cent cans of soup and $1 boxes of pasta.

It must be noted that some omissions in this book can cause dangerous health risks as well. This is especially the case with regards to the use of retort pouches, which can only be safely sealed with chamber-vacuum equipment – industrial devices running between $500-$1000.  Suggested shelf life of the meals is not provided either, and considering many of the recipes include “packets” of “waxed cheese” and various fat-based products, it looks like a recipe for food poisoning.

For those intent on preparing for emergencies or long camping trips who already own a good deal of preserving equipment and knowledge, Julie Languille’s Meals in a Jar: Quick and Easy, Just-Add-Water, Homemade Recipes can provide some interesting ideas and combinations. However, for the majority of consumers out there looking for a truly “quick and easy” fix for dinner, a box of pasta, a can of beans and a jar of tomato sauce is just as healthy and “homemade”, while being cheaper, easier and faster than dragging out the pressure canner.