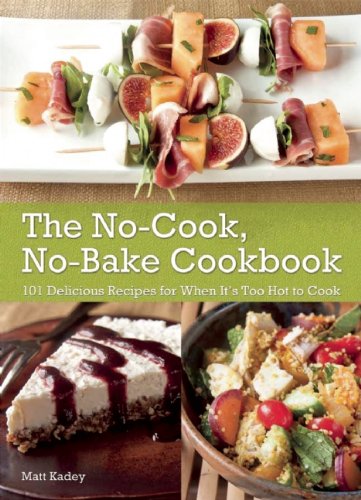 It’s hard to believe that we’re almost into August. Generally known as the hottest, most humid and least comfortable of the Summer months, it’s a time when everyone would rather be outside swimming, gardening, or golfing – definitely not inside heating up the oven. That said, we all have to eat whether we’re confronted by the mid-summer heat or chilled to the bone in February. Matt Kadey tackled the “Summer supper” conundrum in his new cookbook: The No-Cook No-Bake Cookbook: 101 Delicious Recipes for When It's Too Hot to Cook. For the purposes of this review, I’ve abbreviated the title to NCNB.

NCNB takes the classic staples of Summer cooking – fresh produce, quick-mix condiments and cooling dairy – and adds pantry items like canned beans and fish, nuts and breads to transform them into gourmet-looking fare. Far from your standard salads and ice cream, Kadey instead suggests Watermelon Jicama Salad (p. 39), Shrimp and Noodles with Sweet and Sour Sauce (p. 72) and Cherry Granita (p. 113). If a recipe calls for something cooked (like a cereal or pasta), a combination of boiling water and ingredients like oats, rice noodles and couscous does the trick. The occasional shrimp called for in NCNB is purchased in precooked, frozen form, while tuna or salmon is canned – not only are these cook-free options, but even organically purchased they are economical ways to include seafood in the diet. The few chicken-based recipes make use of the readily available rotisserie chickens from the supermarket, and after Kadey finishes with them it’s hard to tell they weren’t made in your own home. Most of the protein options in NCNB are actually the most convenient and nutritious items in the pantry and fridge – beans, lentils and tofu. Nuts and dairy add some variety as well, so the “un-cook” need never worry about boredom or nutrition deficiencies! Despite the decadent and hearty looking recipes in this book, the nutrition aspect of them is in good standing thanks to Kadey’s nutrition background (he is a registered dietitian, nutrition writer and recipe developer). Luckily, the food itself doesn’t necessarily taste “healthy” – just delicious!

One of the things I particularly liked about this book was that it wasn’t a “raw food” or “health food” collection. While there are a few recipes that appear to be culled from the raw foodist circle (Carrot Cake Muffins (p. 137), Applesauce Pie (p. 139) and a few other desserts in particular), the majority of items are more assembly jobs of ready-to-eat elements. I wouldn’t suggest this book for a strict vegan (there is a lot of dairy and other assorted animal products), nor would I recommend it to someone with nut allergies, but most vegetarians will be able to make most of the recipes in NCNB by either swapping in vegetable proteins or simply leaving out the meat in favour of more vegetables (a favourable option for most, as the amount of protein in a typical diet is generally far too much). My personal favourite in the collection is the sushi bar-esque Cucumber Seaweed Salad (p. 45), which made a fantastic meal topped with marinated tofu. The Smoked Tofu Wraps (p. 98), another vegan option, are on my to-try list as well, and is flavourful enough that it would be a good option for anyone regardless of dietary preference. Unfortunately I wasn’t as impressed with the Pizza Stacks (p. 92), which tasted too oily and salty for what should have been a relatively light meal.

Whether you are coming home sweating from a run, retreating from weeding duties or simply not in the mood to heat up the kitchen, you will likely find an option in Matt Kadey’s The No-Cook No-Bake Cookbook: 101 Delicious Recipes for When It's Too Hot to Cook. Filled with fresh twists on cooling fare for every meal of the day, the dog days of Summer have become the best excuse to get back to the kitchen... and out again!

Available on Amazon
Written by Sarah R at 7:06 PM
Labels: 2013, Matt Kadey, no-cook, The No-Cook No-Bake Cookbook: 101 Delicious Recipes for When It's Too Hot to Cook, Ulysses Press

Child will be able to perfectly prepare for school, as well as significantly improve their intellectual abilities. Agree that it is free math games for 2nd graders much more interesting for a child to solve examples and study the multiplication table along with colorful and funny characters in the game format.