500 of the Healthiest Recipes and Health Tips You’ll Ever Need
Authors: Hazel Courteney and Stephen Langley 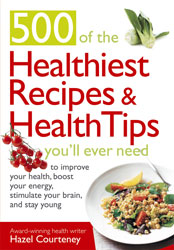 We are all trying to be healthier. Whether there is a specific goal in mind, like losing weight or treating a pre-existing condition, or there is just a general desire to feel better, overall wellness is paramount. Before turning to drugs or supplements as a “quick-fix” solution, why not try nature’s original medicine – food? 500 of the Healthiest Recipes and Health Tips You’ll Ever Need is a collection of nutrient-rich recipes and hints in a relatively easy-to-navigate, colourful format.

While this is a recipe book in title, Healthiest Recipes essentially takes on the role of baby-stepping bible for any sort of health complaint. Unfortunately, the “hype” associated with many “natural” and “holistic” nutrition circles carries into the book courtesy of Stephen Langley, a London-based naturopath. Now, I have nothing against natural remedies – in fact, I am a practicing holistic nutritionist myself – but many portions of this book are impractical or expensive to the average individual. In some cases the suggestions are even dangerous for those with the conditions the book is intended to treat! While well meaning, trying to be a “jack of all trades” just translates into contradiction and confusion for the readers. For example, in the “Anti-Allergy Foods” chapter (p. 22) the opening pages suggest tamari, miso and natto and suitable foods for a soy allergy, and even mentions tofu as being tolerable to some. Obviously, those with a true allergy will find this “handy swap” completely useless, as all of those items are soy based. Far more helpful would have been tips on how to spot potential allergens in ingredient lists, such as casein for milk-avoiders or xanthan gum for those with a corn allergy. There is no mention of avoiding cross-contamination in the kitchen or pantry either, which can lead to attacks in sensitive individuals. In “A Healthy Heart” (p. 116), the authors state initially to avoid all table salt, then mentions that it’s okay if not “in excess”. This would be fine if they had included what a “reasonable” level was, and also included any added salts in the blanket statement. There is also good deal of fuss made about gluten and wheat damaging the gut and affecting nutrient absorption (p. 32) immediately following two recipes containing gluten-ridden spelt, soba noodles (which are often made with a blend of wheat and buckwheat), soy sauce and stock (both of which often contain wheat and/or gluten). Gluten and wheat are too often presented as the “root of all evil”, but some notes simply state to “eliminate wheat”, which will not help matters a great deal if it is the gluten protein causing the issue. The statement that wheat and gluten free pastas are better for balancing blood sugar is also misleading, as many commercially available options are still made from processed, refined flours which spike glucose at the same (or worse) rates. The book even admits that “many gluten-free foods are high in cornstarch and/or syrup” (p.32), two items they denounce in earlier pages.

This is not to say every tip in Healthiest Recipes is fraught with inaccuracy. Many nutrition and health notes in the pages are correct and interesting to read. The most useful of these are often found in the “Food as Medicine” sidebars (like pineapple’s enzyme bromelian acting as digestive aid, anti-inflammatory agent, blood cell “lubricant” and anti-tumour agent (p. 62) and why having a banana before bed gives you the tryptophan your body needs to convert to melatonin for proper sleep (p. 249)). The “Health Tips” are for the most part no slouches either – being a mix of trivia (people with Type A blood suffer from more circulation-related problems and artherosclerosis (p. 121)), nutrient advice (CoQ10 acting like an energy “spark plug” and heart support (p.260)) and lifestyle modifications (how to get your kids (and you) moving more for a healthy heart (p.133)). However, some of the hints border on “too technical” for the average reader to pay attention to.

What should have been the most useful portion of is the “Larder List” (p. 16). However, this list of “staples” is so long that even the largest pantries would have trouble holding it all! Seven types of vinegar and six varieties of sweetener are listed, but the recipes often call for them at random points without explanation as to why one is better than another. No fewer than fifteen types of fats and oils are also listed along with 15 types of grains and a multitude of nuts and seeds. Aside from the spices, the majority of these ingredients are expensive and not used in any quantity large enough to give them true value in the common cash-strapped home.
The recipes in Healthiest Recipes are in general very good, if you can abide the complexity of them. Most readers will find some of the phrasing is confusing. I noticed that the delicious-looking Falafel with Avocado, Tomato, and Red Onion Salsa (p.85) “deep fries” the chickpea cakes in 3 tablespoons of oil – which is a ridiculously tiny amount for a cooking method that denotes that food is submerged completely in hot fat to cook. I was also amused to see rice milk being used in a dish that also contained goat’s cheese (p. 30) and another that calls for raw honey, then proceeds to broil it (p. 38) – two of the many contradictory ingredient lists in Healthiest Recipes. Most modifications are simple enough for the skilled cook to handle, and the use of internet search engines is invaluable for ingredient substitutions (especially in the case of sweetener and dairy substitutions). That said, the Cardamom Rice Pudding (p. 113) I made with almond in place of rice milk was surprisingly creamy and perfectly spiced, though I did need to add a touch of salt (an ingredient missing in most of the book’s recipes). The Ribbon Vegetable and Hummus Wraps (p.71) were a surprisingly simple, filling lunch that would have only been made better with the addition of some alfalfa sprouts for colour and bulk. My mother has bookmarked the Miso and Seaweed Broth with Noodles (p.141) to try out, being a fan of the Japanese broth, and the Beet and Walnut Cake (p.242) I made for some friends (using a stevia baking blend and honey in place of the xylitol) blend was devoured to praise.
If you’re looking to be the master of your own health, Hazel Courteney and Stephen Langley make a commendable effort to help you along the way. However, I’m questioning how many readers will find the book too confusing, preachy or impractical for their skills as cooks, nutritionists and doctors, or who will be unable to use the book to treat their conditions as intended due to homes with children, holidays and long commutes. Coupled with the errors in the nutrition recommendations and an exhaustive, hard-to-source grocery list, I’m waiting for some serious revision work to take place before I’d title this book the 500 of the Healthiest Recipes and Health Tips You’ll Ever Need.