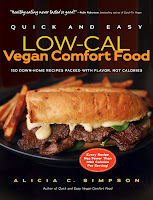 Meat eater or meat-freer? Die hard carnivore, fish-head, veggie belly or flexitarian? There are so many diets out there that we all fit into at least one “category” when we eat! So, even if you’re not vegan, chances are you know someone who is. Celebrities all over the globe tout this way of eating – which eschews any and all animal-derived items including eggs, dairy and even honey – as the best way to eat for mind, body and planet. Ethical issues are often cited as reasons many eaters switch over, but increasingly the crusade has been led by people searching for a healthier lifestyle or a way to lose weight.

Unfortunately, just because something is “vegan” doesn’t mean it automatically becomes a beacon of health. Like with many gluten free foods, there are many “vegan friendly” recipes and processed foods that involve copious quantities of oil, sugar, salt and refined carbohydrates (potato chips and cotton candy are both gluten free and vegan, but are in no way good for you!). The balance of delicious, soul-nourishing fare and healthy, vegan eating is the focus of blogger Alicia C. Simpson’s latest book: Quick and Easy Low-Cal Vegan Comfort Food: 150 Down-Home Recipes Packed with Flavor, Not Calories. Simpson is the author of the blogs Vegan Guinea Pig and The Lady and Seitan, both filled with delicious food, reviews and discussion.

There is no denying the nutrition factor in this book. The first 30 odd pages detail “low calorie” eating, the importance of exercise, definitions of “low-fat / low-calorie”, “serving size” “nutrient density” and the like, and finally calorie-controlled menus for 1400, 1600, 1800 and 2000 calorie diets. A mini “glossary” of common vegan ingredients (i.e. nutritional yeast) is also included, and for true vegan neophytes this is a good read to have under your belt. I also appreciated the visually-appealing lists of serving sizes, covering common items in the “grains”, “vegetables”, “fruits” and “proteins”. The only issue I took with this part was the categorization of potato as a vegetable and not a “grain” like corn. Perhaps the phrase “starches” would have been better suited. As a nutritionist, I also appreciated the RDI tables for calcium and iron. However, I feel that the page of algebraic-like calculations to figure out caloric needs was excessive for a cookbook touted as “Quick and Easy”. There are many websites that are publicly accessible which calculate individual needs and eliminate the possibility of human mathematical error. The nutritional information is provided on each recipe, however the serving size isn’t – meaning that you would have to make the whole dish separately, weigh the components and portion out each element between serving bowls (not quick and/or easy) in order to get a proper calorie count and serving size.

In terms of the recipes, Low-Cal Vegan Comfort Food includes breakfasts, breads, snacks, sides, salads, soups, mains, desserts, beverages and condiments. Simpson also incorporates a section of “basics” – from simple roasted tofu to five types of seitan (including my favourite sausage – chorizo!). Many of the recipes use the same ingredients, or are themselves used in other recipes (aka “recipes within recipes”). This can be a boon or a hindrance to those looking for “quick and easy” – if you are willing to spend a weekend preparing all the basic elements of a meal for later in the week, then when it comes time to put it all together it is more than acceptable to expect a 30-minute turnaround time. However, this is not a book that caters to impulse cooking. For instance, Wet Burritos (p. 176) could very well be a weeknight meal – but not if you haven’t made the Taco Seasoning Mix (p. 234), Enchilada Sauce (p. 236) and Refried Beans (p. 112) first. Granted, you can (and should) make batch-ups of these components once you find a few recipes you love, and keep them on hand in either fridge or freezer. Would-be cooks from Low-Cal Vegan Comfort Food should also be familiar with the flavours, textures and preparation methods for things like quinoa, amaranth and millet and be prepared to spend the extra money (if not vegan normally) to buy liquid aminos, soy yogurt, non-dairy cream, “butter” and “cheese” and TVP. Unlike most nutritionist-vegans, Simpson is unabashedly a fan of both soy and gluten for protein, which is refreshing to see, but I do with there were more whole legume-based meals (the majority of the book’s legumes are in soup).

I had the experience of both resounding success and dismal failure while cooking from Low-Cal Vegan Comfort Food. Both the Crispy Chile Peas (p. 94) and the South Carolina Peach Jam (p. 240) were tasty and perfectly spiced and interesting twists on a crunchy snack and toast spread. However, the Buttermilk Biscuits (p. 68) had a very strange flavour – nothing reminiscent of buttermilk – and did not become the flaky puffs I know biscuits to be. The Banana Nut Bread (p. 82) never baked through, despite extra oven time and every trick in the book I knew of. The loaf was also woefully lacking in flavour, being devoid of vanilla or spices. I don’t expect a “spice cake” with my banana breads, but one without cinnamon? My batter-tasters agreed: it was definitely missing something, and both those recipes felt to me like a waste of fairly expensive soy yogurt and almond milk. Thinking that it could simply be that Simpson’s forte is not baking, I tried the Yellow Split Pea Soup (p. 148), and was overwhelmed by sweet and smoky flavour. There is no salt in the recipe (thankfully there are bay leaves, but too many for my taste), and I found that I needed at least a good teaspoon to bring it back over to the “savoury” side, and added lashings of black pepper and a pinch of basil to try and liven up the flavour. With the modifications I made, it was serviceable, and if I was to make it again I’d leave out at least two of the bay leaves. I did have some success with the Spiced Cranberry Sauce (p. 123), since it’s not as sweet as most (a quality I like), but then again it’s hard to mess up cranberry sauce! I would love to make the Chorizo (p.45) and the Moon Dusted Donuts (p. 214) but at this point I’m hesitant to try.

Vegan fare does not have to be boring, difficult, unhealthy or outlandish. Everyone needs to feel comforted by a meal every so often, and if they can do that while adhering to their dietary needs so much the better. There are many aspects to Alicia C. Simpson’s writing I like, some even love, but the inconsistent success I had with the recipes in Quick and Easy Low-Cal Vegan Comfort Food: 150 Down-Home Recipes Packed with Flavor, Not Calories indicates it will probably be a very occasional resource in my kitchen.