Bean By Bean: A Cookbook 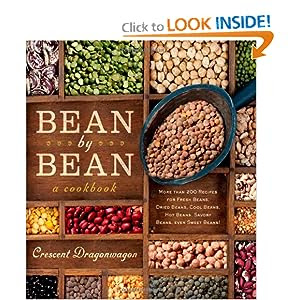 Being, for the most part, a very-low-fat vegan, beans have been part of my pantry and kitchen for years. I haven’t met a bean I didn’t like (excepting fava and lupini), and will gladly spend summer afternoons tending, harvesting and eating the fresh Romano and string beans growing in the garden. However, I appreciate that standard bean recipes can become a bit “boring” and tedious to make and eat – there is only so much minestrone, dhal and chili one can have before dinner becomes “beans again?”.

Enter vegetarian “comfort cook” and author Crescent Dragonwagon and her latest book Bean By Bean. This book provides readers of all tastes and ability levels with over 175 recipes, most of which featuring the humble legume in pride of place. The book starts off with a lengthy, intensive essay of sorts covering the basics of beans, even including nutrition and history notes which are more generally interesting than relevant to the cookery. What most readers (especially those new to beans as a staple food) will appreciate is the section titled Unmasking the Mischief of the Musical Fruit (p. 6). Not only does Dragonwagon include “pharmaceutical” remedies such as Beano (though it should be noted that the specific variety she suggests is no longer produced), but includes a list of factors that affect the legume’s digestibility and potential to cause gaseous side effects. The author also provides some helpful herbs and spices that can be added to cooking beans to minimize discomfort – including summer savory (great in Bean & Barley Salad (p. 141)) and cumin (prevalent in chili powder and curries like Dahl (p. 81)). Finally, Bean by Bean’s introduction offers basic cooking instructions and tips for every type of bean available – green (like wax beans), shell beans (which the author terms “semi-mature”) and the most common form – dried. Soaking, “de-gassifying” and a discussion on using canned and home cooked frozen beans for speed and ease are also included and definitely worth a read if you are a novice to this food. For specifics as to the treatment, substitutes and common usage of almost any bean or lentil you could want to try, the Appendix (p. 344) provides a helpful chart that is easy to read and follow.

One of the enjoyable elements of Bean By Bean is the peppering of quotations and trivia throughout the pages. While Dragonwagon’s colloquial, conversational style of writing and humour can be a bit wearing at times (especially in large quantities like this 370-page tome), the quotations are from a variety of sources, such as my personal favourite from the Yoruba people of western Africa:

I also liked the fact that many recipes offer variations on the theme. Changing out one or two ingredients or spices transforms the standard All-Day Baked Beans (p.216) into a global kaleidoscope of flavour (from Vermont to England and even the Caribbean). This book includes recipes for vegan, vegetarian, gluten free and meat eating (or as Dragonwagon writes, “meatist”) diets, and while a recipe may contain meat, dairy or gluten verbatim the options to modify are almost always given.

Not all the recipes in Bean by Bean include the legume itself. Most of the chapters offer bean-free side dishes, condiments and breads designed as a complement to the main ingredient. Dragonwagon previously wrote a book comprised of nothing but cornbread, and three cornbread recipes do find themselves in this book as well as biscuits and steamed brown bread. Vegetable sides like Roasty-Toasty Carrots & Onions (p.37) and sweet-savoury items like Mixed Fruit Salsa (p. 181) break up the carb-heavy dishes and are very tasty on their own as well.

The book’s major strength is it’s ability to take a potentially boring ingredient and showcase it in every form imaginable. Far from the standard soup and chili you’d expect to find in a book like this, Dragonwagon also includes what may be the most comprehensive bean-centric dessert chapter in any published work to date. In fact, it is in this section that my favourite recipe falls – the cheekily named “Don’t Hurt Yourself” Bean Pie (p. 327). This 1897 recipe is very similar in flavour and texture to a pumpkin pie, but features navy beans as the main filling agent. Everyone I served it to enjoyed it – including children (though I didn’t tell them what was in it!). On the savoury side of the plate, I adored the simple flavours of Oven-Roasted Green Beans (p. 229), especially the variation with tomatoes and garlic. The CD’s Chili Mole (p.170) would be a perfect comfort food mid February, as would the Four-Star From-the-Cupboard Red Bean Stew (p.188). I was looking forward to trying Dragonwagon’s version of Vegetarian Cassoulet (p.234), but was turned off by the heavy use of meat analogues in place of other natural flavouring agents. It is worth noting that Dragonwagon is not shy with her use of these items, especially flavoured soy sausages and tempeh. Also, for those readers who are motivated more by photos than words, bear in mind that this book contains no photography whatsoever.

With a host of health, economic and ecological benefits, the versatile bean  is a food that should be on our plates more often than not. Luckily, authors like Crescent Dragonwagon have provided us with tomes of ideas and recipes to play with at home. With Bean By Bean, it’s possible to travel the world through your tastebuds, and save a few pennies for a plane ticket too.