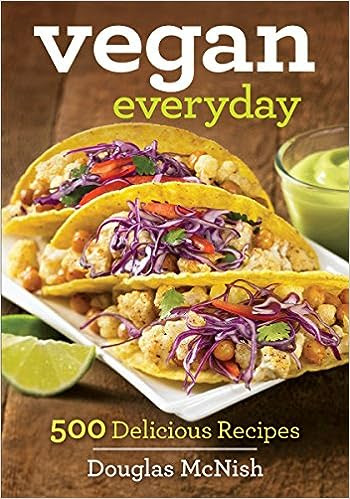 Veganism isn’t the easiest diet for many people to get their heads around – considering that animal-based ingredients are everywhere (from supplements to “fortified” orange juice and even soy-based cheese and meat alternatives!) consumers almost need a university science degree to adhere to the “cruelty free” standards of living these days. While there is compelling evidence s,that a meat free (or mostly meat free) diet is better for your heart, liver, kidneys and digestive system, a lot of new vegetarians and aspiring vegans tend to turn to meat and dairy analogues for the bulk of their diet. The occasional soy burger or “unchicken” stir fry is rarely an issue, and is a convenient, quick meal mid week – however, forgetting the basic fruits, vegetables, legumes and grains out there that are not only cheaper, but more nutritious, is the pitfall most of the “mainstream”, non-chef vegans I know fall into. Toronto-based vegan chef and author Douglas McNish is aiming to bridge the gap between time consuming, nutritious ingredients and delicious, simple meals in his new book Vegan Everyday: 500 Delicious Recipes.

Vegan Everyday is relatively unique in that it’s not simply a vegan cookbook. McNish is also a supporter of gluten-free eating, and one of the few chefs in Canada who combine the two. Vegan Everyday is perhaps a bit of a misleading title in this respect, since the recipes are both vegan and gluten free – and while generally available, affordable (and whole- food) vegan ingredients are almost exclusively called for, many consumers in smaller cities may have a harder time sourcing certified gluten free items to make recipes to the letter. This book, however, doesn’t directly demonize gluten nor wax poetic about how animal products are harming everything we hold dear, and unless medical reasons are a determining factor using “standard” versions of foods like oats and pasta do not have any bearing on the outcome of the recipes themselves.

One of the things I like about Vegan Everyday is how McNish manages to demonstrate the importance of a well stocked pantry – not only for restricted diet cooking, but in general as well. Most of the time, nutritious cooking methods are also employed, with the author relying heavily on fresh and dried herbs, whole spices and whole food flavour combinations rather than refined salt and sugar to make delicious and filling meals. The fact that this book is so restricted in its focus means that it’s not overly child- or allergy-friendly in design – only a handful of the recipes would be suitable for a “standard” American household, and for those with allergies to nuts or coconut, a different book entirely would make more sense. Those of us who thrive on visual references when cooking will find that this book is sorely lacking photos as well – more so than many other books by this publisher. The two meager inserts in the middle of the 480-page tome are only partially filled with pictures of the recipes themselves – the rest of the pages are “beauty shots” of various fruit and vegetables that have little bearing on what the book represents.

The recipes in Vegan Everyday are delicious in theory – and while paging through the book I earmarked several whose flavour combinations echoed my own tastes (like Baked Chana Masala (p. 349) and Deep Chocolate Brownies (p. 444)). However, when it came to making the dishes in question, my success rate diminished to roughly half. In general, the simple, low- or no-cook items (like Singapore Summer Rolls (p. 93) and Spinach Sautéed in White Wine and Garlic (p. 292)), while not overly original, were great successes with vegans and non-vegans alike. The soups I tried were for the most part delicious (and all certainly passable) – in fact, the Roasted Cauliflower and Garlic Soup (p. 328) has become one of my favourites with a dash of smoked paprika whirled in, and while the texture of the vegan Mozzarella called for in the French Onion Soup (p. 316) was off-putting, the broth underneath was rich and definitely worth a repeat. With the holidays coming around, the Triple Ginger Cookies (p. 428) and Lemon Vanilla Biscotti (p. 437) are on my shortlist too!


Unfortunately, many other dishes simply fell short of being worth the time and effort to make them. The namesake protein in the Jerk Tofu, Avocado and Plantain Wraps (p. 360) was closer to a holiday spice cookie than an Island dish in flavour, lacking any hint of jerk’s trademark fire. Berry Oat Bars (p. 157) managed to be both mushy and granular in texture – the steel cut oats retained a bit too much structure after chilling and felt like overly chewy tapioca pearls between my teeth. The presentation of the bars also left a lot to be desired, as they first fell apart when I tried to remove them from the pan, then re-baked into dark, crusty cubes – even after following the directions to the letter. Penne a la Vodka (p. 265) looked promising but tasted of nothing but alcohol and gummy cashews.

One of the common misconceptions about veganism is that it’s a guaranteed weight-loss diet that is automatically healthy. While I applaud Douglas McNish’s passion for choosing generally nutritious ingredients, I definitely won’t call this a “low calorie” cookbook for dieters! Vegan Everyday uses a generous amount of various sugars (usually agave nectar, which is itself a refined sweetener) and salty ingredients like miso, neither of which should have a starring role in anyone’s daily menu. Many recipes call for high amounts of naturally fatty nuts, seeds and oils as well – and while these choices also tend to provide added nutrients like Omega fatty acids and vitamins, again moderation should be exercised. With a few modifications to the recipes (which could be as simple as reducing the amount of oil, agave and/or salty ingredients) this book would better suit it’s “everyday” moniker.

You don’t have to be a 24/7 meat-avoider to enjoy vegan fare at least a few nights a week – nor do you need gourmet training to create filling, balanced and healthy dishes. Books like Douglas McNish’s Vegan Everyday: 500 Delicious Recipes are a great resource when it comes to basic recipes and cooking methods, as well as ideas for making up your own stellar meals. With a few stars under your belt, you’ll be ready to tackle any breakfast, lunch or dinner situation.