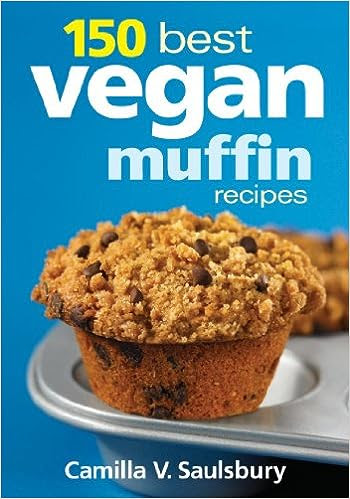 It’s hard to find anyone who doesn’t love a good muffin. The quintessential quickbread, they are portable, pre-portioned and infinitely variable treats – and depending on the recipe, they can invoke feelings of angelically healthy sainthood, decadent sin or devilish spice. Most common renditions of the classic muffin rely on eggs, milk, or both, but not all of them – as author Camilla V. Saulsbury points out in her book 150 Best Vegan Muffin Recipes.

Vegan Muffin is a great resource for any muffin man (or woman) to have in their collection, from those who have never set foot in the baker’s kitchen to those who can whip out a dozen with their eyes closed. The book begins with a 20-page primer on muffin baking in general, from tips for Muffin Mastery (p. 6) to the equipment and ingredients you’ll need to achieve your ideal results. While the ingredients section of the introduction is specified as “vegan”, anyone can – and should – glean the information should the need to reduce or eliminate animal products from cooking or baking arise. If you only choose to read one portion of the preamble, though, make it Muffin Mastery. It was in this section that I learned the tricks to adapting recipes for different tin sizes and freezing muffin batter for a-la-minute baking – two tips that have made me a veritable “muffin queen” at home. Not only are all the recipes in Vegan Muffin free of animal products (and thus, two major allergens – egg and milk), but Saulsbury shares so many interesting variations on the theme that it’s almost impossible to get bored. Not “preachy” or belabouring the vegan views, the focus of the book is to share tasty and generally nutritious options everyone can enjoy together.

The recipes in Vegan Muffin are generally divided by their intended time of enjoyment: Breakfast (43), Coffeehouse (85) (AKA breaktime), and Lunch and Supper (113). At the end of the book is a chapter on Global Muffins (155), which definitely brings into light just how variable the simple quickbread can be. Saulsbury also includes a chapter with her Top 20 Muffins (21), which includes the mother recipe for Best Basic Muffins (22).  In general, all the ingredients Saulsbury calls for are relatively inexpensive, easy to find in decently stocked supermarkets, and often already found in many a pantry these days, putting to rest the argument that veganism is too complex or expensive a lifestyle.

I chose to make Saulsbury’s Lemon Poppy Seed Muffins (p. 28) first, as my sister had returned from college with a taste for the cafeteria’s version. The recipe (which I made with white whole wheat flour) came together quickly, although we agreed that the lemon flavor needed a little more oomph and the poppy seeds could have been dialed back a bit. A subsequent batch with an added teaspoon of lemon extract and only two tablespoons of poppy seeds was a resounding success, and if you are baking for traditionally “non-vegan” clientele I would strongly suggest either unsweetened almond or rice milk for their mild flavours, since soy can bring a “beany” tone to the finished dish. To test out the “bake from frozen batter” guide in the Muffin Mastery chapter, I jumped at the chance to make Saulsbury’s version of one of my favourite combinations – Chocolate Avocado Muffins (p. 98). The recipe baked up splendidly both fresh and frozen, although I would suggest reducing the oil to ¼ cup from 1/3, as mine were a little greasy for my taste. The original recipe doesn’t call for chocolate chips, but a sprinkling on top gives them more of a “bakery” look and will convince anyone – even avocado-haters like myself – to have a bite.

Enjoying a freshly baked muffin was never an experience solely for the omnivorous crowd, although traditional bakeries and cookbooks can make it seem that way. A delicious variety of tastes and textures await anyone who picks up a copy of Camilla V. Saulsbury ‘s 150 Best Vegan Muffin Recipes – you need only pick one and get into the kitchen!