Copykat.com's Dining Out At Home Cookbook 2

Copykat.com's Dining Out At Home Cookbook 2: More Recipes for the Most Delicious Dishes from America's Most Popular Restaurants

Going out to eat is a treat we all enjoy – sometimes a bit too often. Sitting down to a meal at a restaurant often means gargantuan portions and mystery ingredients we’d rather not know about. Then there’s the price – at $10 and up a head, your dining budget can be blown by Wednesday. While molecular gastronomy is a bit beyond the reach of common home kitchens, traditional fare is far more accessible – not to mention cheaper, faster and fresher. “Copy-cat” cooking is even easier these days thanks to books like Stephanie Manley’s Copykat.com's Dining Out At Home Cookbook 2: More Recipes for the Most Delicious Dishes from America's Most Popular Restaurants. It’s her second compilation of the best of the restaurant classics and favourites, building on her successful website and the ever-present demand for the “secret recipes” we crave.

Dining Out is perfect for those of us who enjoy casual or family restaurants as well as popular takeout or fast food spots. Items from Panera Bread and Starbucks are featured as well as favourites from IHOP and Outback Steakhouse. The biggest issue for international readers like myself is the fact that the restaurants are exclusively American-based (and usually) chains. While it may taste phenomenal, without the familiar point of reference the charm of enjoying a perfect slice of Luby’s™ Pecan Pie (p. 154) for example is slightly lost. Luckily, (or unluckily!) chains like Starbucks, KFC, Taco Bell and McDonalds are popular worldwide and have more or less standardized menus. Favourite standard and seasonal items (like KFC’s Coleslaw (p. 114) and Starbucks™’ Pumpkin Spice Latte (p. 17) will tempt readers all over the globe, and once readers taste those copies the urge to make other (more or less foreign) foods will be irresistible.


Dining Out is an all inclusive book with respect to the meal options and ethnic diversity. Readers will be able to make and enjoy Lettuce Wraps from PF Chang’s China Bistro™ (p. 38) for a Chinese-inspired lunch or light dinner, cozy up to a bowl of Pesto Pasta from Alonti’s™ (p. 69) for an Italian supper and dig into good old American-style Banana Bread French Toast from IHOP® (p. 174) for Sunday breakfast. Desserts fit snugly into the book’s 312 pages too, so if you have a sweet tooth you certainly won’t be left behind! Sadly, there are no photos to tempt the visual cooks out there – inconvenient, although most readers will know what the finished products will look like anyway. Another thing to note about this book is that the recipes are formulated to be true to their namesakes – not healthier remakes. There is lots of fat and sugar floating around, which speaks to the richness of the final products as well as indicate what the restaurants really do to make their dishes menu-worthy.

That said, I initially struggled to find a recipe or two in this book to test for this review. Not only are a good portion of the restaurants US-based as mentioned before, but as a whole my family doesn’t eat out often and tend to stick to leaner fare. However, the Boiled Shrimp and Avocado Salsa (p. 41) from Saltgrass Steakhouse® was a hit with my co-workers, the Homemade Taco Seasoning (p. 191) became a boon to my household for our regular “taco nights” especially because it’s salt free (though for my vegetarian mix I added a touch of smoked salt, which was a definite plus). Of course, you can’t argue with the classic (and often craved) Pumpkin Spice Latte (p. 17), which is easily veganized (and honestly better tasting when you use unsweetened vanilla almond milk!) and not overly sweet. For those I shared the recipe with, it was the clincher that sold them on copy-cat recipes.

While we may not have the luxury of going out to eat every night, we can emulate the best of what we crave in our own kitchens. All we need is the “secret recipe” – and with Copykat.com's Dining Out At Home Cookbook 2: More Recipes for the Most Delicious Dishes from America's Most Popular Restaurants, you’re sure to find a treasure trove of them. 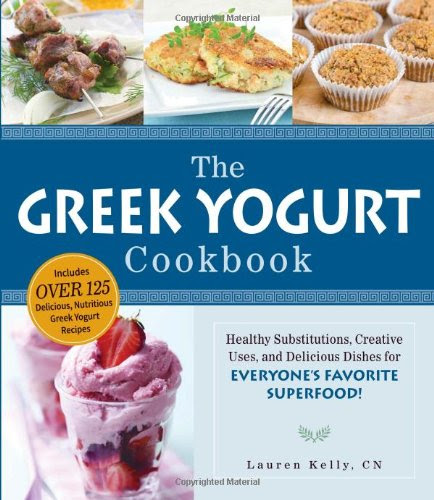 Greek yogurt is definitely the health foodists’ darling these days. Thick, tart and full of pre- and probiotics, it’s a fantastic addition to the modern diet. It’s natural rich, yet “blank slate” flavour profile adds to it’s versatility, making it a boon to the home cook. This diversity beyond a simple breakfast food and smoothie medium is extolled by nutritionist Lauren Kelly in her latest book: The Greek Yogurt Cookbook: Includes Over 125 Delicious, Nutritious Greek Yogurt Recipes.

Greek Yogurt takes the plain dairy staple and transforms it into a wide array of taste sensations. Vegetarian items throughout the book are symbolized for easy reference – and with a handful of exceptions (mainly in the Entrée chapter) the recipes generally fit this dietary choice. Readers will find more standard uses for Greek yogurt, like Tzatziki Dip (p. 36) and Coffee Cake (p. 136), as well as more innovative items like Buffalo Chicken Pasta (p. 127) and Roasted Tomato Galette (p. 88). Not to be left out, there is also an entire chapter dedicated to smoothies – my favourite two being the Chocolate Peanut Butter (p. 55) and Oatmeal Cookie Dough (p. 66) varieties. When I made the Oatmeal Cookie Dough recipe, I swapped out the almond butter for cashew, which I felt lent a richer, less pronounced nuttiness while still keeping the “baked” flavour of the original (and is a trick I picked up from Cooking for the Specific Carbohydrate Diet: Over 100 Easy, Healthy, and Delicious Recipes that are Sugar-Free, Gluten-Free, and Grain-Free).  There are no photos of the dishes except on the cover and a smattering in the centre insert, which while not a deal-breaker is certainly something to consider if you are a visual learner.

Since my family is generally not a fan of Greek yogurt au naturale, we were fascinated by what Kelly offered in her recipes. I used both storebought and homemade yogurts when cooking from this book, and as long as the consistency of the ingredient was thick and dense the amount of fat generally didn’t make an impact. For instance, the aforementioned smoothies were made with our usually purchased 0% brand, as was the Shrimp and Spinach Pasta Medley (p. 119) that we enjoyed between Christmas and New Year’s. The homemade yoghurt, clocking in at about 2% fat, made a surprisingly rich Deep Chocolate Frosting (p. 141) that had the perfect amount of tang to cut the icing sugar. I did, however, opt for the full-fat (10%) variety when I made the Chunky Tomato Soup with Fresh Basil (p. 41), given that it was a longer stovetop preparation and I didn’t want to risk it curdling in the heat. The soup was definitely my mom’s favourite recipe from the book – to quote her, the finished dish “tastes like an Italian Summer’s tomato sauce”. While cooking, it certainly evoked memories of past years’ long-simmered tomato sauces, and I’m sure that it would in fact be perfectly serviceable over a bed of linguine.


Being a nutritionist, Kelly also makes sure to include a brief but important discussion in Greek Yogurt on the nutritional qualities of her star ingredient. While nowhere near a textbook’s worth of information, it is still a worthwhile read for those considering jumping on the yogurt bandwagon but are concerned that it is all simply a fad.

The simplicity in a bowl of creamy Greek yogurt is a pleasure all unto itself. However, it is also a versatile and nutritious ingredient that can make a meal truly special. Lauren Kelly realizes this and brings the delicious world of Greek yogurt to the masses with The Greek Yogurt Cookbook: Includes Over 125 Delicious, Nutritious Greek Yogurt Recipes – now a staple on my bookshelf.