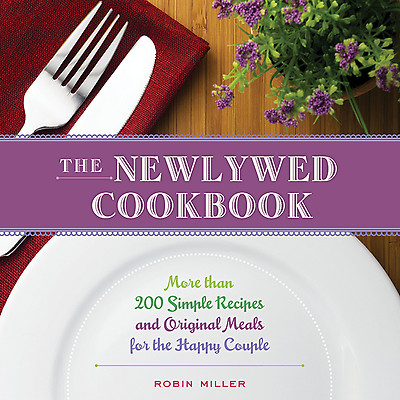 I’ve never been married, but I did spend a few years of my life as a co-habiting university student, out on my own for the first time with a tiny apartment kitchen and busy days. Like most adults, I did not have the time nor energy to explore a hundred different cooking styles or strange ingredients that I wasn’t familiar with. Nor did I have the money to buy specialty items (and I certainly couldn’t eat out every night!). However, I am a bona fide food lover and did have basic cooking skills, so over time I self-taught myself a roster of go-to recipes that were healthy, cheap and above all – delicious. Nowadays, fewer and fewer schools teach home economics – a trend that translates into a whole generation of adults who are starting life on their own or with a partner and don’t know what to do! But Food Network star Robin Miller has compiled some of her most charming recipes into a cookbook geared towards the newly married crowd. Aptly titled The Newlywed Cookbook, it features over 200 recipes with easy-to-follow instructions, menu suggestions and culinary information.

The items in Newlywed run the gamut of tastes and diets, from the vegetarian comfort food classic Mac ‘n’ Cheese (p. 21) to the fancy Chicken and Wild Mushrooms in Champagne Cream (p. 157) and even the rather outlandish Christmas Goose (p. 173). Breads, noodles, poultry, beef and other “hoofed” meats, seafood, sides and desserts all find home in the book, giving almost every family or individual something to enjoy. Vegans or those with any sort of allergies to wheat, dairy or eggs will struggle to find a full menu in this book, however, and even vegetarians will find their prospects severely limited for mains other than pasta (although they could perceivably make a meal of sides).

Some of the organization of recipes in my advance copy is a bit confusing, though this may have been corrected in the final printing. While there is a “Pizza and Bread” chapter that includes quickbreads like Super Moist Banana Bread (p. 8) and Apple Spice Bread (p. 11), other “bread-like” objects such as Banana-Nut Scones (p.132) and muffins are found in the “Desserts and Other Sweet Treats” section. The index is equally confusing to navigate and I trust that the appropriate appearance and cross-referencing changes will be made so that a search for Apple-Cinnamon Coffee Cake (p. 189) does not end under the letter “D” after a 5-10 minute quest.

The recipes I tried out of Newlywed were met with mixed reviews for flavour and “simplicity”, mostly that the taste of the mains was too bland for the amount of ingredients and prep work that went into them. However, the experience of making the recipes as written once would definitely provide the novice cook with the skills and confidence to then tweak the method to suit their own palate, schedule and chequebook. If I was to make the Thai Noodles with Peanuts (p. 23) again, for instance, I would likely add curry paste or extra Sriracha sauce as well as another scoop of peanut butter and extra vegetables. Miller’s Peking Duck (p. 70) missed the trademark crispy-ballooned skin of the original and needed both more soy and sweetness to mimic the restaurant fare, but was tasty enough on its own when the expectations of the iconic platter weren’t there.  In terms of desserts, the Apple-Cinnamon Coffee Cake (p. 189) was passable in that it was moist and tried to be a nutritious end to a meal (being low in fat), but the flavour just wasn’t there. No spice in the spongy, overly sweet batter (the victim of a full cup of granulated sugar) made the chunks of apple seem like miscues. The topping was added after the cake was baked, and subsequently fell off, without any trace of the intended flavour left behind. I’m going to play with the recipe a bit more to come up with a real “cinnamon coffee cake”, but most of the intended audience for this book will likely pass it over the second time around.

While learning to cook is a vital part of “growing up”, it helps to have a solid starting point and resource to build success on. There are undoubtedly some gems in Robin Miller’s The Newlywed Cookbook, but they are too few and far between as of this review to warrant a ringing endorsement from this foodie.