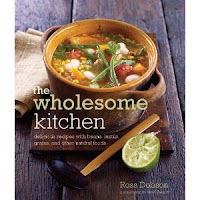 Author: Ross Dobson
Publisher: Ryland Peters & Small (2010)
More than any other topic in the health and lifestyle world, the poor nutrition quality of the modern diet is big news. Typical Western fare has lead to ballooning obesity rates, more (and younger) diabetes patients, and staggeringly low vitamin and mineral diets – but with the increase of public interest in preventative healthcare, a growing investment in the meals on the table has taken root as well. Be it for ecological, ethical, or medical reasons, the tide is turning in favour of a whole-food, mostly vegetarian approach to mealtime; embracing legumes and whole grains in a variety of forms. While it may be second nature to some (generally those in the younger generations without years of “home cooking” behind them) to embrace this new manner of eating, those who grew up on pre-made foodstuffs or with the ideology that a meal isn’t complete without the combination of “meat and starch” can find the prospect of a vegetarian menu daunting. Ross Dobson, author of Kitchen Seasons: Easy Recipes for Seasonal Organic Food proves in his new book Wholesome Kitchen: Delicious Recipes with Beans, Lentils, Grains, and Other Natural Foods that a more healthful way of nourishing yourself is not only simple and economical, but decadent as well. 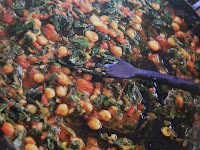 Far from being a “preachy” piece of nutrition lore or a vegan manifesto, Wholesome Kitchen is first and foremost a book for those who simply love good food. Full-colour photographs throughout the piece capture the very essence of Dobson’s credo – fresh ingredients at the very peak of their taste, texture, appearance and nutrition potential. The entire book is divided into simple, useful chapters: appetizers (including dips, spreads, fritters and even a terrine), soups, salads, sides, main dishes and desserts. Though I might argue as to the placement of some of his recipes (particularly in the Sides chapter, where Southern-Style Red Beans and Rice (p. 82) and Mujaddarah (p. 88) could easily form a full meal), I am likely in the minority and those looking for a vegetarian main dish alternative to the four Dobson includes could easily peruse the other sections (including the filling soups and salads). 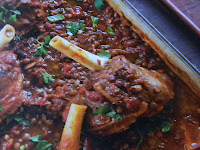 Each recipe is a simple, yet elegant preparation that never overshadows the beauty of Mother Nature’s bounty. Both meat eaters and vegetarians alike are catered to throughout the book – from Real Chili Con Carne (p. 111) to the hearty Three Sisters Soup (p. 33) featured on the front cover. A handful of vegan (or easily veganized) recipes are also included – making this book a great resource for incorporating regular “meatless Mondays” in your menu plan. The meat dishes in Wholesome Kitchen are not overbearingly carnivorous – Dobson uses the animal protein as almost a condiment in the sense that they are parts of a bigger whole.

Regardless of whether or not the dish in question contains meat, readers can be assured that plenty of fresh, nutritious ingredients are front and centre. Legumes abound in everything from salads to desserts, and whole grains are much the same (a boon for anyone’s health!). Many different cultures are also embraced by Dobson, endearing Wholesome Kitchen to household gourmets (or would-be gourmets, like me) everywhere. I fell in love with the spectrum of flavours and textures in the Spicy Three-Bean Salad (p.59), although it was slightly too oily for our overall tastes. 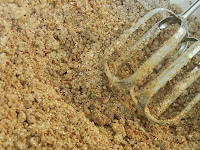 Although Dobson includes many fairly conventional recipes in this book (including oatmeal cookies, bran muffins and a fruit crumble), it is clear that he is a cook rather than a baker.  I wanted to try one of the slightly more unique items he featured, and having made a wide array of chocolate chip cookies, from vegan and whole grain to butter and sugar-laden, I was immediately drawn to the eggless Quinoa Choc Chip Cookies (p. 131). After following the directions to the letter, it became clear that there was a distinct problem with the formula. Rather than becoming drop cookie dough (of any kind that I could envision), the bowl looked like it was filled with something similar to coarse sand. It took almost 1/3 cup of extra liquid to bind together and allow the chocolate chips to be stirred in. Once baked and cooled, however, the taste (albeit a bit too sweet) was phenomenal – slightly nutty from the ground quinoa and oats, peppered with chocolate and with a melt-in-your-mouth texture that was so tender that you have no option but to cool them completely on the sheets before moving them. For those wanting to hazard this recipe, aside from more liquid I would suggest using a coffee grinder or powerful blender to grind the quinoa and oats (not a food processor as Wholesome Kitchen states), invest in parchment paper or a silicone mat to bake on (rather than grease the pan as is implied – but not overtly stated – in the final step mentioning “prepared” sheets), and cool the cookies entirely on the sheets (don’t “[t]ransfer to a wire rack to cool” immediately, as stated).

It is clear that Dobson is invested in bringing the love of good food to the tables of the world. This is not a “low fat” or “low calorie” book, but it is not intended as one. Rather, the impression Ross Dobson clearly broadcasts is aiming to enhance overall nutrition with a wealth of whole foods, benefiting the body on every level. Wholesome Kitchen: Delicious Recipes with Beans, Lentils, Grains, and Other Natural Foods is unique in its variety of cultures, cooking techniques and dietary lifestyles, and is useful for those of practically any age in any season. With stunning photography to lure the reader in, and the delectable meals to trap them, it will assist many of those who want to turn the tides of modern-day health. 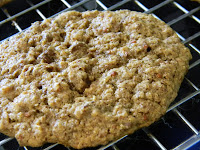