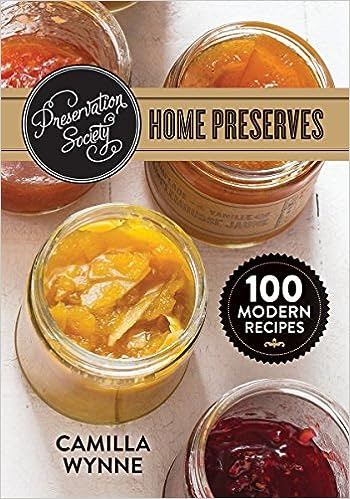 It’s no secret that I spend a good chunk of my Summer and early Fall standing over a stove full of boiling pots. Whether I’m crafting a classic bread and butter pickle, marinara sauce or jam, while the garden is producing I am conserving full-tilt. There’s nothing more rewarding than cracking open a jar of peach jelly in the dead of winter that you canned from still-warm fruit in August, or being able to set an antipasto platter with pickled vegetables that you can proudly claim you made. While canning and preserving is commonly dismissed as a “lost art” that demands more time and effort than our “5-second” lifestyle can afford, pockets of professionals and would-be gourmets are trying to bring it back in favour. Camilla Wynne is one such foodie – an ex-musician turned Master Preserver, writer, teacher and founder of Preservation Society in Quebec. Her book, Preservation Society Home Preserves: 100 Modern Recipes, is now available in English and is a decadent read for anyone with a passion for preserving.

Wynne sets a mandate in Preservation Society to use as much local, seasonal produce as possible. Beyond the realm of simple strawberry jam or applesauce, recipes run the gamut from cocktail-inspired (Strawberry Margarita Jam, p.29) to dessert-worthy (Poires Belle Hélène, p. 82), spicy (Devil’s Chutney, p. 130) and even somewhat bizarre (Pickled Raisins, p. 118). Preserves of all kinds are addressed in the book as well – the contents include Jams, Marmalades, Jellies and Butters, Canned Fruits, Syrups, Pickles, Chutneys, Relishes and Savory Jams and a refrigerator preserve chapter aptly titled “For the Fridge”. Near the back of the book is a small section with suggestions on how to utilize all the delicious preserves you’ve put up (if simple toast isn’t enough!) – between the PB&J Scones (p. 176), Onion Jam Poutine (p. 168) and the Marmalade Pecan Pie (p.174), you (or your gift recipients) will never be caught wondering what to do with that jar of Christmas Clementine Marmalade (p.51) from the holidays.

The breadth and exoticism of Wynne’s choices speaks to her clear creativity and enthusiasm, keeping seasoned canners interested. Thankfully for newbies, recipes are also deceptively simple behind the list of ingredients. The book builds a foundation on solid, scientific preserving principles so readers can venture out into creating their own treats, and while the bulk of the recipes don’t use pectin (which I personally view as a “failsafe” measure that I can also use to customize sugar levels in my jams), the cooking times and temperatures are precise enough that it’s almost impossible to fail – not to mention the lack of a packaged, pre-portioned product like pectin means recipes are easier to scale back to make just a few jars.

I have to admit that of the recipes I’ve made so far from Preservation Society, the Peach Jam with Bourbon and Honey (p. 25) and Dill Pickles (p.106) stole my heart and won over the family – we’re a household of peach lovers, and when they’re in season we do everything we can to gorge on the fruit. The jam was the perfect use for farmer’s market “seconds”, and tastes like that August morning at the farmstand. The pickles get a nice kick from chili peppers, and I liked the unusual addition of the dill root as well. I’m not sure what it adds to the pickles per se, but I do know the jar disappeared in short order! I also canned some of the Poires Belle Hélène for Christmas gifts, after their “quality assurance” taste test checked out with everyone who came into contact with the first jar. Other than remembering to shake the jar before serving – the cocoa settles at the bottom – it’s a no-fuss, no muss elegant finale to a meal when topped with ice cream or crumbled gingersnaps.

Preserving the glorious flavours of local, seasonal and fresh produce is not only simple, but easily varied and adapted to the tastes and needs of the canner. The flavours in Camilla Wynne’s Preservation Society Home Preserves: 100 Modern Recipes are as rockstar-worthy as her past career, with all the creativity of an artist but possessing the attention to detail not unlike a chef. Why not give your toast the treatment it deserves every morning?